The Igloohome Deadbolt 2S ($199) is a sleek Bluetooth-enabled smart door lock that allows you to unlock your door, create permanent and temporary PINs for family and guests, and view activity logs, all using your phone. It also offers support for Airbnb guests and is equipped with a tamper alarm and an emergency jump-start option that lets you unlock the door even if its batteries die. It’s relatively quiet and offers smooth operation, but its mobile app can use some tweaking and it lacks many of the features that you get with our Editors’ Choice, the August SmartLock Pro + Connect, including Wi-Fi connectivity, email and push alerts, and the ability to lock your door using the mobile app.

The Deadbolt 2S is one of the sharpest-looking smart door locks we’ve come across. The slim, glossy black outer escutcheon, which measures 5.7 by 2.2 by 0.5 inches (HWD), looks like a smartphone and has a touch-screen keypad that remains dark until you touch it, at which point it glows white. What looks like a round button on the face of the lock, just below the keypad, is actually a magnetic cover, that when removed, reveals a keyhole. You get five physical keys with the lock that you can use in the event that the batteries die or you’ve forgotten the PIN code. There are also two silver terminals on the bottom edge of the escutcheon that are used for opening the lock when the batteries are drained. Simply touch a 9-volt battery to the terminals to supply enough power to operate the touch-screen keypad.

The matte black interior escutcheon is made of zinc alloy and measures 6.2 by 2.5 by 1.2 inches and contains a thumbturn and a privacy button that lets you temporarily disable the keypad. A button at the top of the enclosure releases a cover, behind which are four AA batteries and two mounting holes. Igloohome includes four AA batteries, assorted mounting hardware, an installation and user guide, and a drilling template for new doors. It also comes with a magnetic door sensor that will automatically lock the door when it is closed and is outfitted with a tamper alarm that will sound if somebody tries to pry the lock from the door. 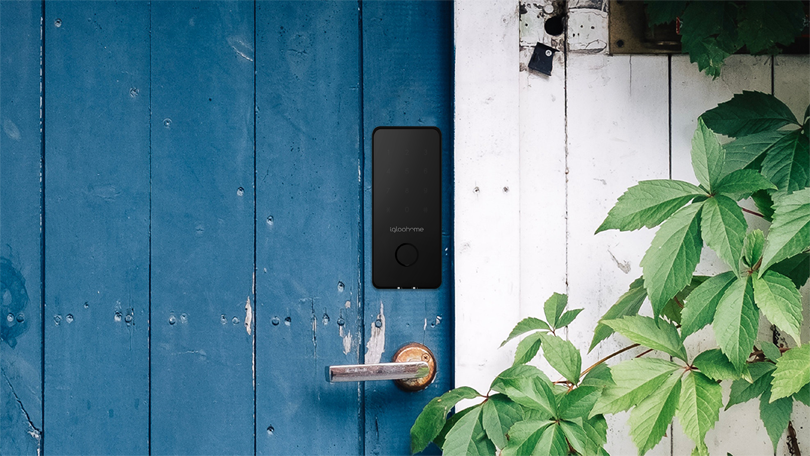 The Igloohome mobile app (for Android and iOS) allows you to control the lock, assign PIN codes, and manage users. It opens to a Lock Info screen with a large round circle with a lock icon in the middle. When you tap the icon the lock will unlock, but the icon remains the same and does not change to indicate that the lock was unlocked. Even worse, you can’t relock the lock using this button like you can with other smart lock apps, and it lacks geofencing support, which locks and unlocks the door based on your location. You either have to use the keypad by pressing and holding the # button, rely on the automatic door sensor, or use the Timer Relock feature, which automatically locks the door after being open for a preset period of time. Or, you can use the thumbturn to lock and unlock the door.

At the bottom of the Lock Info screen are three buttons. The Info button returns you to the opening screen. The Access button takes you to a screen where you can issue temporary or permanent PIN codes with specific access times and duration dates and view a list of current active and inactive PIN codes. Here you can also issue a Bluetooth key that allows other users to open the lock with their phone. The Log button displays a list of all activity including who has unlocked the lock (if done via Bluetooth) and when. It also shows if a PIN code was used and displays the PIN code number.

Tapping the gear icon in the upper right corner opens a screen with a battery meter and tells you how many PIN codes and Bluetooth keys have been issued. Tapping the three-bar icon in the upper left corner opens a menu where you can add new locks and new homes and configure account settings such as passwords and account usernames. Here you can also connect with your Airbnb account to set up guest access for properties equipped with Deadbolt 2S locks.

Unlike the August SmartLock Pro + Connect and the Nest X Yale Lock, the Deadbolt 2S does not work with other smart home devices such as cameras and doorbells, nor does it offer support for IFTTT applets or Apple’s HomeKit platform. It also lacks support for push and email notifications that alert you when the lock is being used. It does offer support for Amazon Alexa and Google Assistant voice commands, but is limited to generating PINs and reading out your activity log and will not lock or unlock the door. 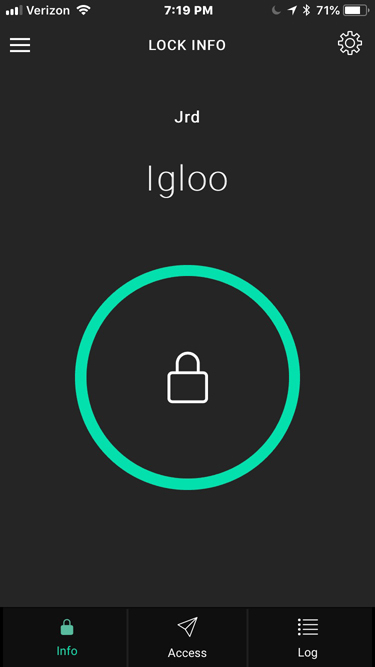 Installing the Deadbolt 2S isn’t much different from installing a traditional lock assembly, which is to say it is relatively easy and shouldn’t take more than 15 to 20 minutes. The installation guide offers comprehensive illustrated instructions to help you along. I removed my old lock, cylinder, and latch assembly and installed the new latch assembly. Next, I attached the outer escutcheon to the mounting plate, trimmed the tailpiece to fit my door thickness, and attached the door sensor to the mounting plate. I then attached the interior escutcheon, connected the door sensor and main data cables, and installed the four batteries.

Once the lock was installed, I downloaded the app and created an account. I verified my email address, tapped Add New Igloohome Lock, and selected the Igloohome Deadbolt 2S from the list. Following the on-screen instructions, I placed my palm over the keypad to activate the lock, tapped Next, and selected the lock. Using the lock’s Bluetooth radio, the app was paired to my phone in a matter of seconds. I gave the lock a name, created a home name, and was finished.

The Deadbolt 2S responded quickly to unlock commands made using the mobile app and when pressing and holding the touchpad # symbol. It also responded quickly whenever I used my PIN code to unlock the door, and the Sensor Relock feature never failed to lock the door when it was closed. Similarly, the lock always adhered to my Timer Relock schedule. That said, it would be nice to be able to lock the door using the mobile app, a feature that you get with most other smart locks such as the Friday Lock, the Nest X Yale Lock, the Poly Control Danalock V3 BTZU, and both the August SmartLock Pro + Connect and HomeKit Enabled locks. On the plus side, the locking motor was relatively quiet.

With the Igloohome Deadbolt 2S, you get a responsive Bluetooth lock with a high-tech look and a handful of neat features including three modes of access (Bluetooth, touch screen, keys) and a door sensor that automatically relocks the door when it’s closed. It performed well in our tests, but not being able to lock it using the mobile app is a glaring omission. Interoperability with other devices such as security cameras and video doorbells would also be nice, as would IFTTT and HomeKit support. For a bit more money, the August SmartLock Pro + Connect offers Wi-Fi and Z-Wave connectivity, compatibility with other smart devices and IFTTT, geofencing, and support for Siri voice commands. As such, it remains our Editors’ Choice for smart locks.

The Igloohome Deadbolt 2S allows you to lock and unlock your door using your phone, a touch-screen keypad, or physical keys, though it lacks many of the features that you get with similarly priced smart locks.

Amazon surprised us at its Fall Devices and Services event with its new Luna cloud-gaming service, along with the expected updates